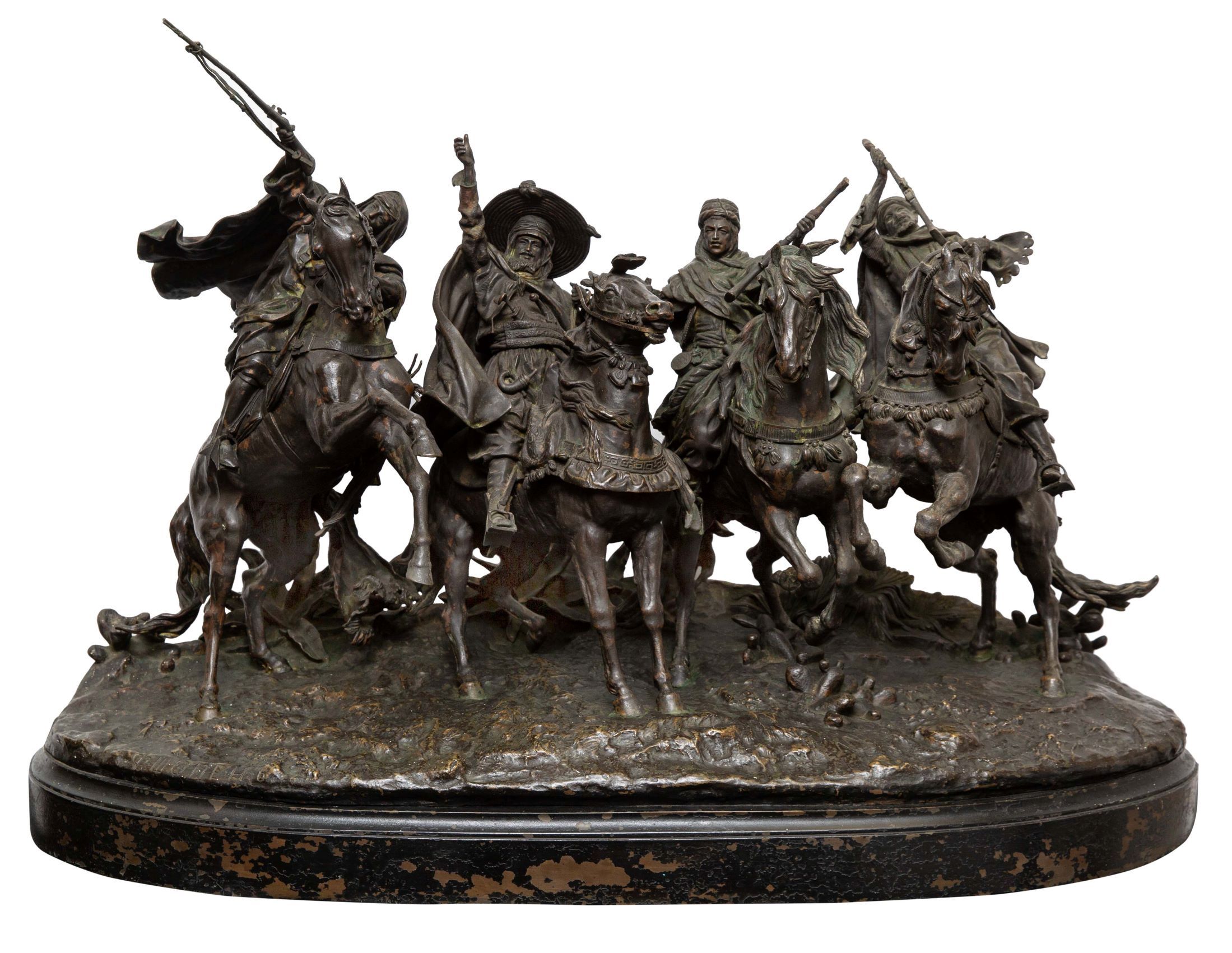 MAMARONECK, N.Y. - HaryanaBlog -- On November 7th and 8th, Shapiro Auctions of Mamaroneck, NY, will be holding a two day auction of important works of art, comprised of more than 700 lots of paintings, drawings, sculpture, jewelry, silver, and decorative arts.  The first day of the auction, November 7th (Lots 1-364) is dedicated to the fine arts and includes important paintings and drawings by listed artists.  The second day of the auction, November 8th (Lots 500-854), is replete with fine jewelry, bronzes, porcelain vases, antique silver and enamel pieces, as well as fine Estate furniture.  The full auction catalog and high-resolution images, can be seen at www.shapiroauctions.com.

One of the most important and rare lots on offer in the auction is lot 516, Evgeny Alexandrovich Lanceray's "Arabic Horse Games".   Lanceray (1848-1886) was known as the pre-eminent sculptor of horses of his day, both in Russia and abroad, influencing other sculptors such as Frederic Remington.  The present lot was the largest bronze grouping, as well as the most expensive, in his career.  Comprised of four distinct horsemen, with their weapons raised in the air in a fantasia style, the sculpture is imposing and breathtaking, measuring 68 x 102 cm (26 ¾ x 40 1/8 in.).  This model has rarely appeared at auction, apparently only three times over the past ten years, with the auction record set in 2013 at $482,500 USD.  Lot 516 is estimated at $125,000-175,000.

More on Haryana Blog
Another highlight of the sale, exceptional in its rarity and Baroque emotiveness, is lot 225, the "Veil of Veronica," by Francisco de Zurbaran (1598-1664).  Zurbaran, known as the "Spanish Caravaggio" due to his masterful use of chiaroscuro, was known to have painted a number of paintings of this subject in his lifetime.  The version in Shapiro Auction's sale has an extensive provenance and was in the collection of Bob Jones University in Greenville, South Carolina, as of 1959, then to Knoedler Galleries in New York by 1974.  It is fresh to the market and powerful in its size and intensity.

Shapiro Auctions has sold many works by the Vietnamese Impressionist masters Le Pho (1907-2001) and Vu Cao Dam (1908-2000) over the past decade, and this auction is no exception.  The November 7th auction includes 4 works by Le Pho and 2 works by Vu Cao Dam, all with Findlay Gallery provenance.  Both artists are highly collectible in Vietnam and their prices in the secondary market continue to grow steadily over time.

Well known for its global breadth of offerings of fine and decorative art, Shapiro Auctions has also sold many works by leading American artists, both older and contemporary.   A rare and desirable American lot in this sale includes lot 538, a rare Tiffany Studios leaded glass and bronze "Russian" table lamp from 1910, estimated at $100,000-150,000. Paintings and drawings by American artists in the sale include works by artists such as Guy Wiggins, Wolf Kahn, Rockwell Kent, Walt Kuhn, and more.

More on Haryana Blog
Isidor Kaufmann (1853-1921) is one of the most highly celebrated artists of the 19th century, known for his incredible attention to detail and exceptionally realistic portraits and scenes of Jewish life in Central and Eastern Europe.  Shapiro Auctions has sold numerous works by Kaufmann over the years, including "The Business Secret," in 2016, which the auction house sold for $455,000 including premium.  The auction house was fortunate to be consigned for this November auction another work by Kaufmann, this time a portrait of a Hungarian Rabbi with Prayer Shawl (Lot 500, estimated at $200,000-300,000). Exhibiting Kaufmann's deft and remarkably precise style, the painting resonates with the gravity and regal qualities of the sitter.  It was included in the 1995 exhibition at the Vienna Jewish Museum dedicated to the artist.

The November auctions at Shapiro also feature a large variety of signed jewelry pieces as well as diamond, gold, and precious stone jewelry.  This includes pieces by Van Cleef & Arpels, Tiffany & Co., Harry Winston, and Cartier, in addition to Faberge and Russian jewelry.  Of special note is an eight-karat diamond ring with GIA certificate (Lot 744, estimated at $15,000-20,000).

The auction can be previewed from 10AM – 6PM from Oct. 29th to Nov. 6th, and from 9AM-10AM on the 7th-8th.  The auction, as well as the preview exhibition, are held at Shapiro Auction's gallery at 566 East Boston Post Road, Mamaroneck, NY  10543.  Ample parking is available.  This is a live auction, with bidding available in person, by telephone, absentee, and numerous internet platforms.